As I embarked on this little project, I had already acquired my Bellisseria passport and had already begun traveling around to various spots on my quest to collect stamps.

It occurred to me that I ought to document the limited edition stamps, since these installations would only be around a short while, so one of the first stops I made was to the Art Unbound popup (in other words, limited editions) exhibition called "Mirages on the Mother Road," 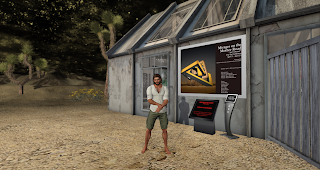 Set amid the picturesque desert landscape that is Mother Road, this is an exhibit brought to you by Infinite Productions and Limoncello Art Gallery, and is only viewable until April 23rd (a mere 5 days from the date of this post so, yeah, you should check it out.)

Here's the link for the SLURL 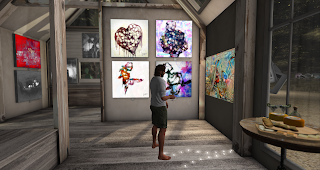 The artists featured in this exhibit are:
Cate Infinity, Gamma Infinity, Esta Republic, Thus Yootz, Kraven Klees, Uleria Caramel, Harry Cover and Morlita Quan.
I have to say I was quite taken by the artwork of Etsa Republic and Kraven Klees.  I'm not sure if, in Esta Republic's case, that it was her artwork, or reading of her flamenco guitarist father and Redwood Forest painting mother.  Those must have been some pretty cool parents, and who doesn't know by now of my love for The Redwoods. 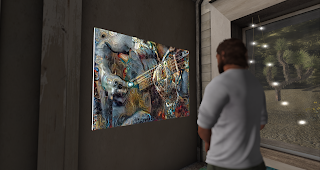 Perhaps it was the use of fractals or the musical theme of this particular Kraven Klees piece called Acoustic that drew my attention, but I would hang this on my wall in an instant!
"Mirages on the Mother Road" is only viewable for a short time (April 23rd) so get in there and take a look, and grab that limited edition passport stamp! 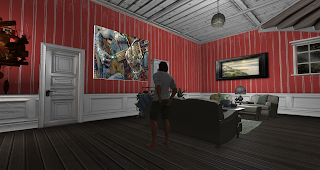 UPDATE!  Turns out even though the installations are temporary, at least in the case of Kraven Klees, if you rt-click and get his profile, he has his artwork available for purchase at his gallery in White Harbor, in the mainland region of Lepudro.  I was able to procure Acoustic, which you can see in the main living room of the tree house at The Redwood Grove. 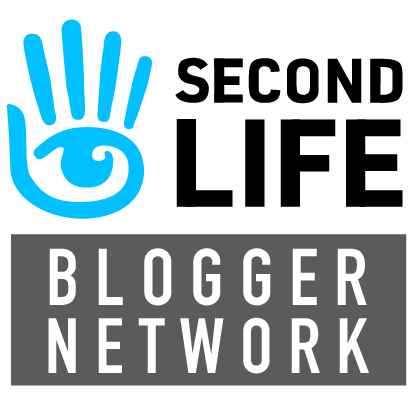